COVID-19 UPDATE: We are open! Our team is working remotely, and offering consultations via phone, e-mail, and video conferencing.

Home Burn Injuries What Are the Causes of Birth Asphyxia?

What Are the Causes of Birth Asphyxia?

Birth asphyxia occurs when a baby doesn’t receive enough oxygen before, during, or after birth. WHO also estimates the annual neonatal deaths caused by asphyxia at 4 million. This number represents 38% of deaths of children fewer than five years of age. 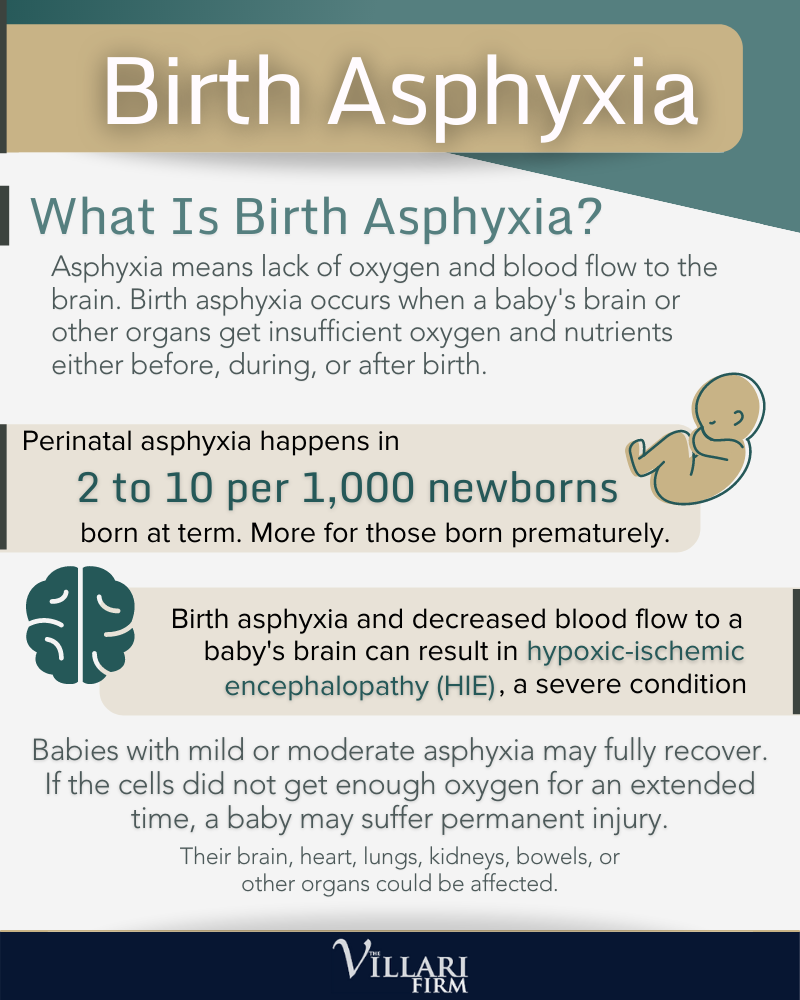 Birth asphyxia occurs when a baby is denied sufficient oxygen for body tissues to function correctly. When this happens, waste products build up in cells leading to temporary or permanent damage. Birth asphyxia is a direct result of hypoxia. This condition can also lead to lifelong injury, congenital disabilities, or death. Common causes of birth asphyxia include:

There are many factors that may lead to a state of hypoxia during birth. The lack of oxygen to the lungs can be directly attributed to multiple factors, many of which, when appropriately addressed, can prevent the resulting asphyxia.

Neonatal hypoxia may occur at any time during the labor process. Several potential risk factors for hypoxia include:

The longer hypoxia is not addressed, the more significant the damage caused by the resulting condition of asphyxia. Therefore, it is essential that healthcare providers make all efforts to identify hypoxia in its early stages to prevent significant, life-long injuries from developing in the child. Injuries sustained from hypoxia happen quickly but are preventable with the proper medical care that addresses any signs of distress caused by hypoxia before, during, or after the delivery of an infant.

What Are the Symptoms of High or Low Blood Pressure in the Mother?

Symptoms of asphyxia at the time of birth may include feeble breathing or lack of breathing, bluish or lighter than usual skin complexion, weak reflexes, poor muscle tone, too much acid in the blood, seizures, and amniotic fluid that is stained with meconium or first stool.

At birth, doctors and nurses check the body’s condition using a metric called an Apgar score. The Apgar score ranges from 0 to 10 based on the baby’s heart rate, skin color, muscle tone, and reflexes. Ideally, a very low Apgar score of between 0 to 3 that lasts longer than 5 minutes may indicate birth asphyxia. Healthcare professionals can also check for other signs that indicate lack of blood flow, including:

Hypoxic ischemic encephalopathy (HIE) is a brain injury resulting from insufficient oxygen in the blood and decreased blood flow to the brain. Both birth asphyxia and HIE can cause a baby to have permanent brain damage which may result in long-term conditions ranging from cerebral palsy and seizure disorders to learning disabilities.

Can Birth Asphyxia Be Treated?

With early diagnosis, it is possible to treat asphyxia. Once the baby is born, they get breathing support until they can breathe normally on their own. Breathing support is sourced from equipment that sends small, rapid puffs of air into the baby’s lungs. Other advanced treatment options may include kidney support with dialysis, body cooling, medicine to treat seizures or blood pressure, and intravenous nutrition to give the bowel time to recover.

Although some causes of birth asphyxia may be unavoidable, the condition could result from negligent or improper medical care. If you believe medical malpractice was wholly or partially responsible for your child’s condition, speak to our experienced birth injury attorney today.

We will check the records of monitoring equipment used before, during, and after labor, which shows the mother and baby’s oxygen levels, respiration, heartbeat, blood pressure, and more. We will also determine if the doctors and nurses took the necessary steps to prevent the condition. Contact us today and speak with our medical malpractice attorney.